Frankfurt International Airport (FRA)
Frankfurt am Main International (FRA) Airport is the busiest airport in Germany. This is Lufthansa Airlines largest airport hub. Rent a car or take the trains to connect to your travel destinations. You can drive down to the Romantic Mid Rhine area. The Mid Rhine area has a lot offer with beautiful castles between Mainz and Kobenlz. Best to explore the Rhine River by boat. Slow down and enjoy the views. You can also explore the Romantic Road.

Munich International Airport (MUC)
Munich International (MUC) Airport is an excellent hub to explore Southern Germany, Bavaria and the Alps. Munich is also known as Munchen in German. If you are travelling during Christmas, the Munich Airport hosts its own Christmas Markets. You can take trains to beautiful cities like Salzburg, Austria or Vienna, Austria and Zurich, Switzerland.

Germany’s Alpine Region
Take a beautiful train journey south to Fussen, Germany. Fussen is located right across the border from Austria. Here you can explore King Ludwig’s castles. The most famous is the Neuschwanstein Castle. You should also check out the Linderhof Palace and Hohenschwangau Castle. If you have time, check out Herrenchiemsee Palace which is based on King Louis’ Versailles. Herrenchiemsee (New Palace) is located on the largest island in Lake Chiemsee closer to Salzburg, Austria.

There is nothing like a beautiful garden that can feed your soul and rejuvenate you on your travels. You get see the beauty of God’s creation along with human design and cultivation.

Keukenhof (kitchen garden) is such a place. The Dutch have a knack for gardening for sure. You can spend hours in this place. I used my layover at the Amsterdam Schiphol Airport to visit this beautiful place. It is only open during the Spring months as this is a Spring Garden. Spring is such a beautiful time of the year as the flowers bloom in the beautiful Spring Sun and cool Spring air.

If you have a chance to visit England, do take time to visit the English Cottage Gardens in the Summer months. An amazing airport where you can shop, dine, sleep, shower, check into a hotel and it is all integrated with a sophisticated transportation hub. It is also beautifully designed to make you feel like you have room to rest and relax! You can pretty much fly from anywhere to every where. They have places where you can securely lock your luggage and leave the airport for a trip into Amsterdam or connect to major European cities by train. The airport is clean and green (eco friendly). Most locals speak good English, friendly and helpful to travelers. The security screening process is also efficient and fast given the number of passengers that are routed from this airport.

Schiphol is the hub for the KLM (Royal Dutch) Airlines. Many other Premium and Low Cost Carriers fly via Schiphol Amsterdam. There is no need to drive or take a train to get to your low cost airlines if that is your choice.  This makes the airport a great hub to start your journey into Europe or other continents. 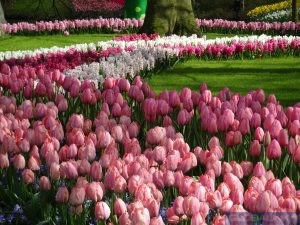 Keukenhof Flower Gardens is the most beautiful flower garden I have ever visited. During a long layover between flights during Spring at the Amsterdam Airport Schiphol (a fantastic transportation hub integrated with bus/train depots) , I took a bus to Keukenhof Gardens.  People are friendly and helpful in Amsterdam and they speak good English. The bus driver was a joy. Once you get to the gardens which is open only in Spring, you will see millions of bulbs of tulips, daffodils, hyacinths and more.  Not to mention about all the flower displays at the pavilions and fun Spring events. You can even take a boat ride in the Garden Canals from the Dutch Wind Mill. You can also grab a bite to eat and enjoy free WiFi at the same time! Pictures cannot describe the beauty of this place. You just have to get out and walk around and enjoy the beautiful scenery and breathe the clean Spring air. It helped break my jetlag and made a tired layover into a memorable fun trip.